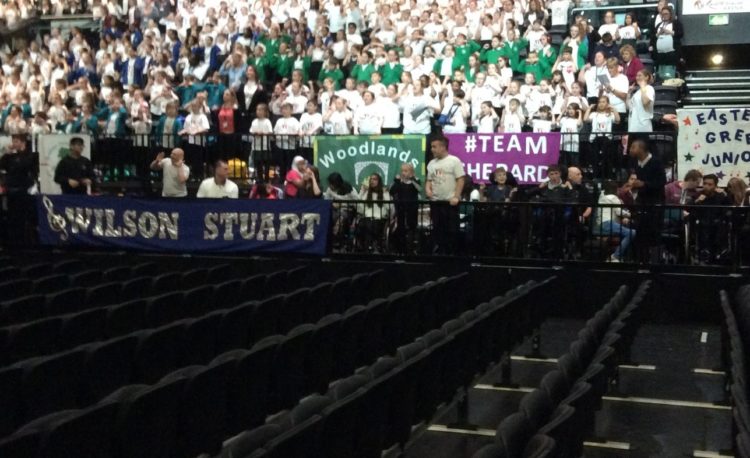 Wilson Stuart took part in the Young Voices Concert on Thursday 16th January, and as usual we got lots of attention from the conductor – David Lawrence, the musical director – Craig McLeish and Creative Director and founder of the Urban Strides Street Dance Company – Any Instone.

To assist with the Young Voices’ mission to provide a musical experience for children that will inspire a love of music and something that they will remember for the rest of their lives – special guest artists are invited to take part in the concerts. This year’s artists were:
The Shires – one of the most talked about acts in the home of Country Music Nashville
Ruti – winner of The Voice UK in 2018, she herself performed at Young Voices back in 2007 with her school choir – “Young Voices was such an impactful moment for me, I hope that I can be part of a moment that impacts someone else in the same way”.

Tony Hadley – Returning for his second tour of Young Voices, Tony was the original frontman of Spandau Ballet, earning himself the accolade of being one of pop music’s greatest vocalists and now enjoys a successful solo career, writing, recording and performing. Tony is a great charity supporter, regularly performing and raising funds in support of children’s’ hospices, medical research for sick children and degenerative conditions and small personal charities where his name can help make a real difference.

Of course, our pupils are the real stars and they were all a credit to Wilson Stuart School with many NEC staff and parents from other schools coming over to compliment the enthusiasm and energy we all put into our performance. The team at Young Voices are more like a family and we appreciate the care and attention we receive each year. Both staff and pupils enjoyed a fabulous night!