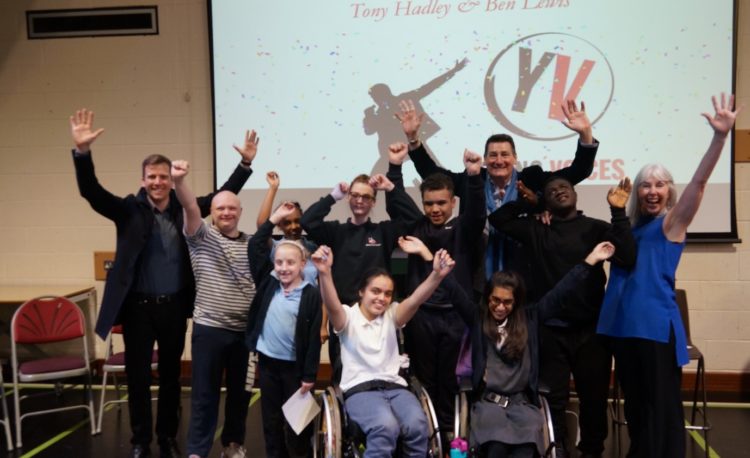 Oh how school was “buzzing”!! With very little notice, we were thrilled to hear that Tony Hadley and Ben Lewis had accepted our invitation to visit school. Our only concern was that they were able to meet everyone within the given time. A plan was devised, including all our students and all the different staff, including those sometimes forgotten – nurses, kitchen and office.

We have known Ben Lewis for over 20 years as he is the now CEO of Young Voices, and first met Tony Hadley when he was the guest performer at Young Voices 2019. He delighted all of our students by saying hello to each of them and he showed a lot of genuine interest and he has stated that “Young Voices is one of the most rewarding things I’ve ever done”. We were very excited to hear that he was returning to perform at Young Voices 2020 and it was following this concert that a hesitant plan was made for the visit to school.

It was clear that both men were very happy to be spending time with each different group and we all slowly made our way through the school building, putting some of the groups together to save time.

When we arrived at the hall, we had assembled all the Secondary, 6th Form and College students. We had made plenty of space between the seating to allow our guests to meet and greet everyone and we all sang a couple of songs together. Three of our students that receive peripatetic singing lessons, also performed, receiving a wonderful compliment from Tony who was clearly impressed with their confidence and ability. The best was yet to come …. and although not planned, Tony did agree to sing his infamous song from his Spandau Ballet days, “Gold”. We all joined in with the chorus and had such fun, that we did it again for a second time. It was incredibly magical and everyone was so happy, including Mr Hughes who bravely took the microphone and sang “Gold” with Tony (and he knew all the words!!).

It was just the best day ever – for everyone at Wilson Stuart, but also for Tony and Ben. They were both very generous with their time and genuine interest and they made it very clear how impressed they were with our wonderful school, students, staff and facilities.

Background Information
Tony Hadley – Tony was the original frontman of Spandau Ballet, earning himself the accolade of being one of pop music’s greatest vocalists and now enjoys a successful solo career, writing, recording and performing.
In 2015 Tony had the great privilege of being invited to Buckingham Palace to meet the Queen as recognition for his charity endeavours, regularly performing and raising funds in support of childrens’ hospices, medical research for sick children and degenerative conditions and small personal charities where his name can help make a real difference.
In December 2019 it was announced that he had been awarded a MBE in the New Year’s Honours List for charitable services to the Shooting Star Children’s Hospice Care.
He is currently working on a new album to coincide with his 40th year in show business.

Ben Lewis – Ben’s father, David Lewis, is the founder of Young Voices and over the last 20 years it has grown in popularity and now covers the UK and Ireland, as well as more recently in the US, Germany and Trinidad and Tobago and Ben is now the CEO.
The fundamental vision behind Young Voices has always been to introduce children to the widest possible spectrum of music whilst giving them the chance to sing in front of a sell-out arena audience with world class artists. By providing this opportunity they have been able to energize music teachers with engaging material that gives them a chance to really connect with pupils. Add to that a venue where all the biggest stars perform, production values of the highest order with sound and light, and you have an experience that is worthy of being a child’s first full-scale music event.
“The benefits of singing together are well documented but the feeling is universal, from rugby supporters singing their national anthem to the crowd at Glastonbury having a sing-along with Lionel Richie; it is the sense of belonging to something bigger than yourself that creates memories that last forever”.
Ben takes his role and responsibility very seriously and states “Musicians are primarily music lovers and it is our duty to back up our words, that children deserve the best possible introduction to music, with action”.